Roxann Weix & David Richert are getting married September 3, 2011, which is just a few weeks away.  We did their engagement shoot at Allen Centennial Gardens.  This offered many beautiful backgrounds, as you can see below.  We started the shoot in the early evening with the intention of getting some soft, beautiful light.

You might want to review the video first so here it is.  There is one objectionable line in the song.  Sorry, but the rest of the song is very nice.

This picture on the bench is where we started the shoot.  I had some difficulty getting my lighting to work as I wanted.  So we took several shots until the lighting and posing worked.  David was a little unsure at first about what I wanted, but in the end the shot works.  It is a little different than just two people sitting on a bench. 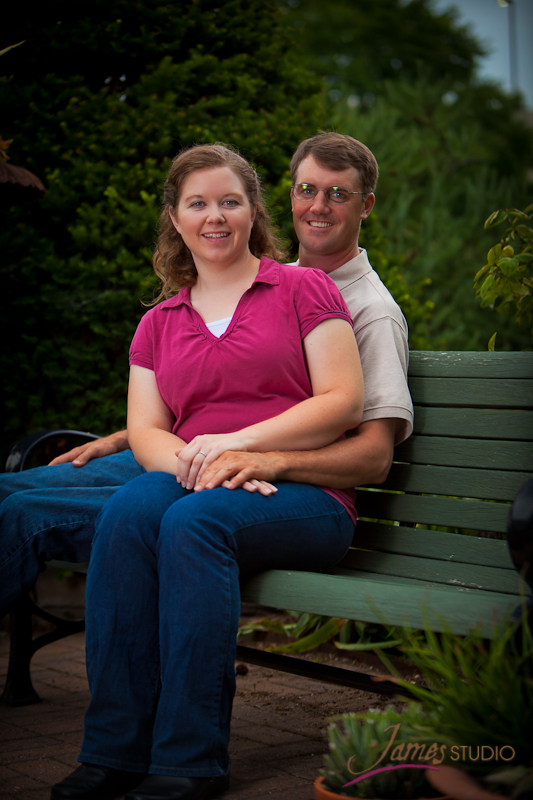 In another location I had Roxann and David at a table and I was shooting through a tree and some bushes.  I loved the background, so I was hoping it would work.  I use a studio flash unit; this allows me to push as much light as I need.   I got several really good shots from this position.  I asked them to kiss, touch foreheads, and, as in this shot, touch noses.  It was pretty funny at the time.  I think they were thinking I was kidding about touching noses but I wasn’t.   I encouraged them do it.  Now, I love the look. 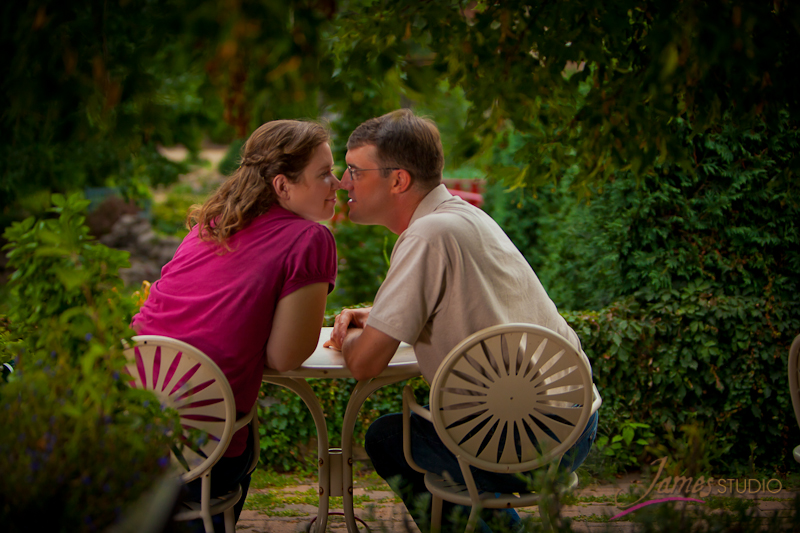 Roxann expressed disappointment that they painted a perfectly natural bridge red.  I agree that natural wood is very pretty, but it can make the wood deteriorate faster.   Anyway, I think  the red bridge looks mighty fine in this picture.   You have to love that reflection. 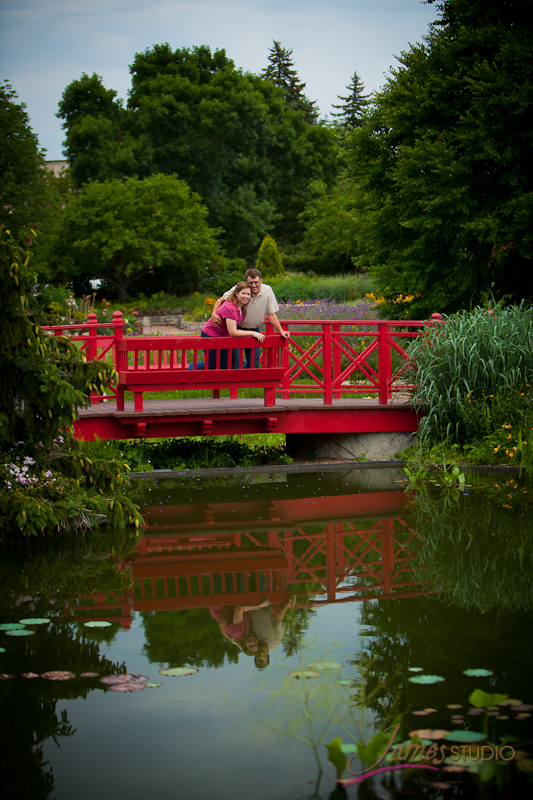 Next we went over to the waterfall area.  I wanted David to sit among the rocks.  He was rightly concerned about the foliage.  We found a spot that worked well and got Roxann to get  in nice and close.   This is their favorite image of the shoot. 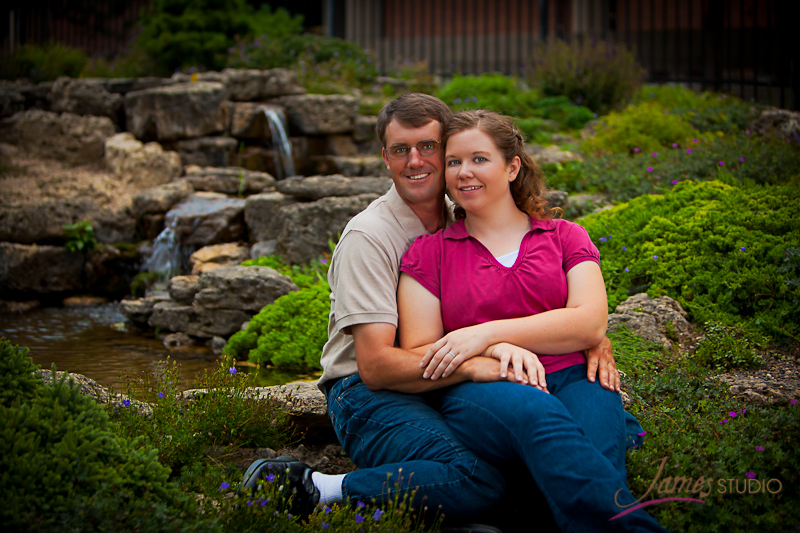 The Centennial Gardens has a nice gazebo.  It has some interesting architecture. 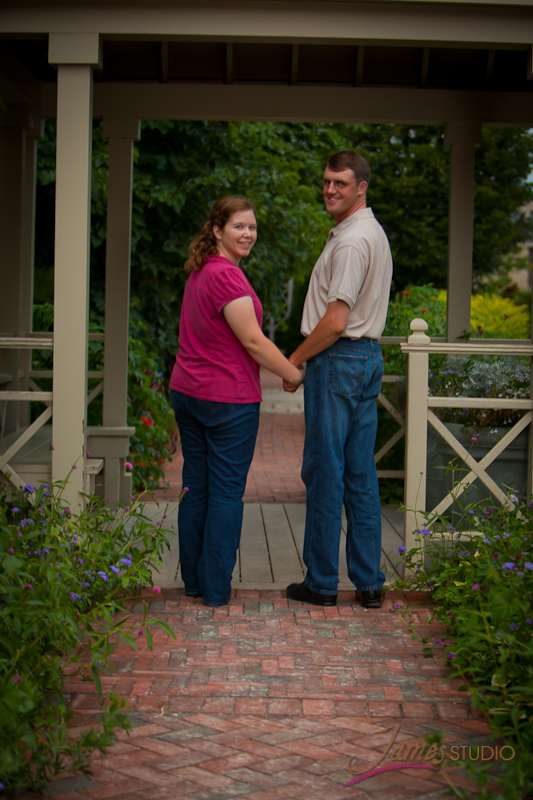 I love fun pictures, and Roxann and David were definitely getting into to the moment, as shown in the following few shots. 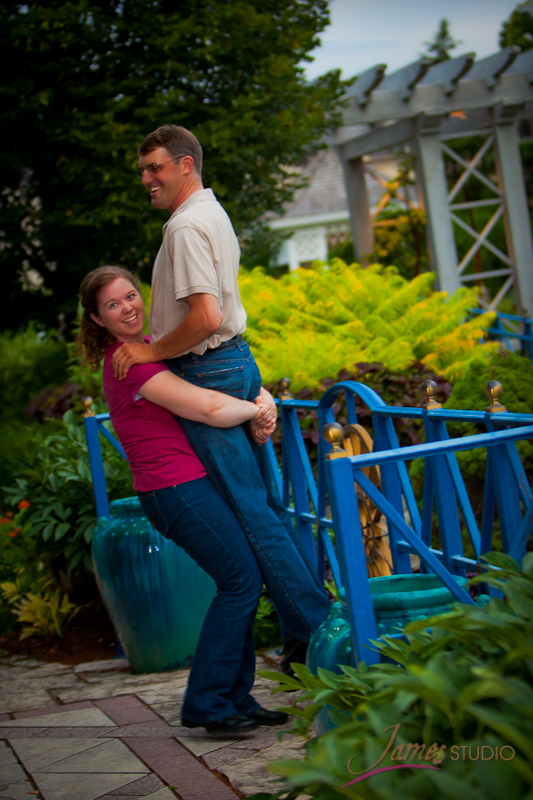 I complained to her because she did this so effortlessly.  But that is not completely true, as this was her second attempt.  On the first attempt she had David too far away from the railing, so he fell.   You can see what I am talking about as you view the video. 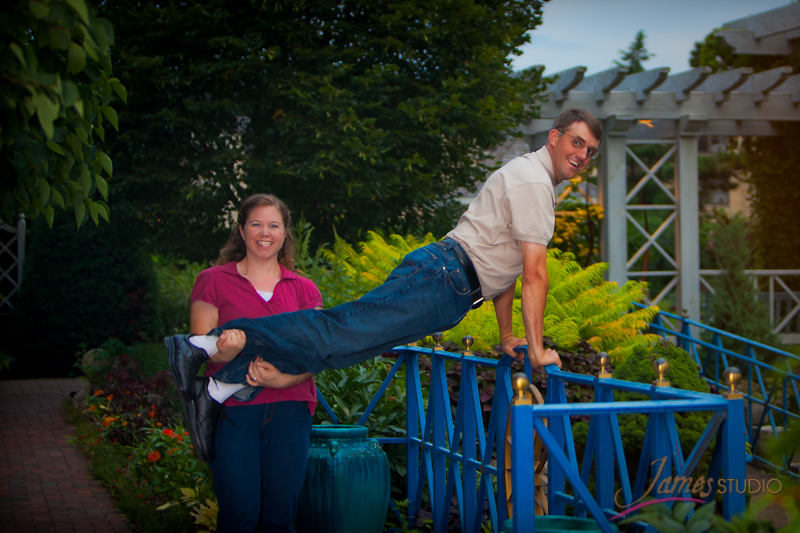 I love these shots where they are clearing enjoying each other. 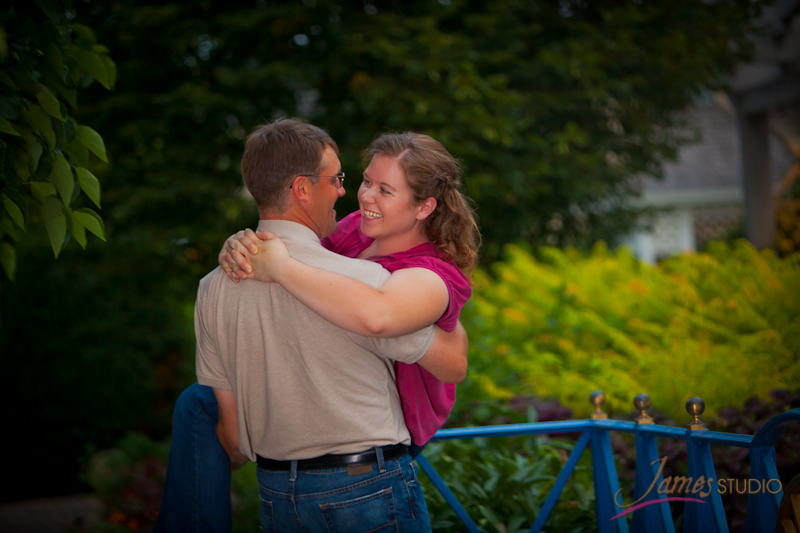 Nice smiles.  By the way, the lighting on their faces is so good because I was using a studio strobe.  It provides very smooth lighting.  The pictures by the average Joe often produce a very flat look.  With these pictures you see more dimension to their faces because the flash unit output is much larger, thus softer, and is off to one side. 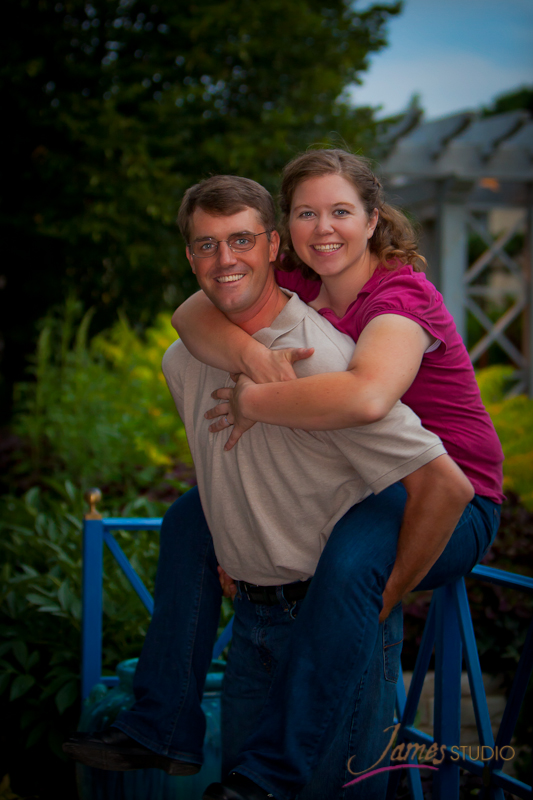 I love this look below where they look like they are just hanging out, enjoying a romantic moment. 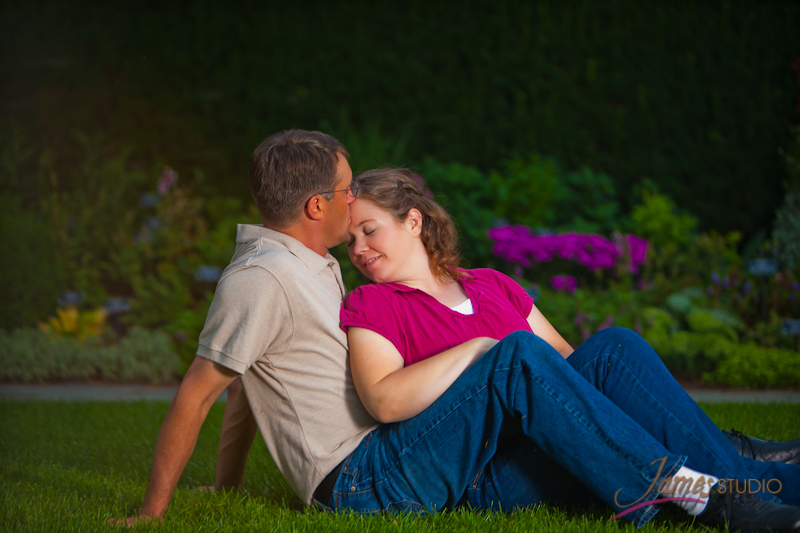 The following two shot are some of my favorites.  I love the lamp behind Roxann and I love David checking out his girl. 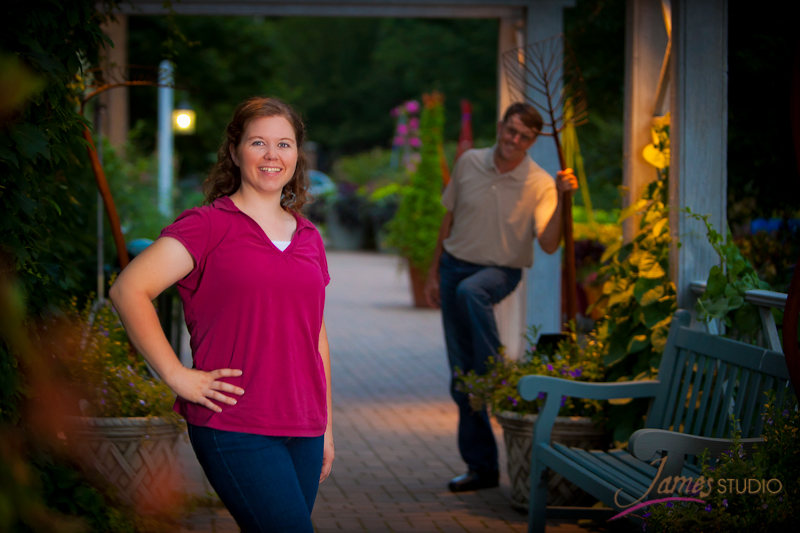 I asked David to do a muscle-man pose.  He was pretty funny.  I don’t think he practiced this much when he was growing up. 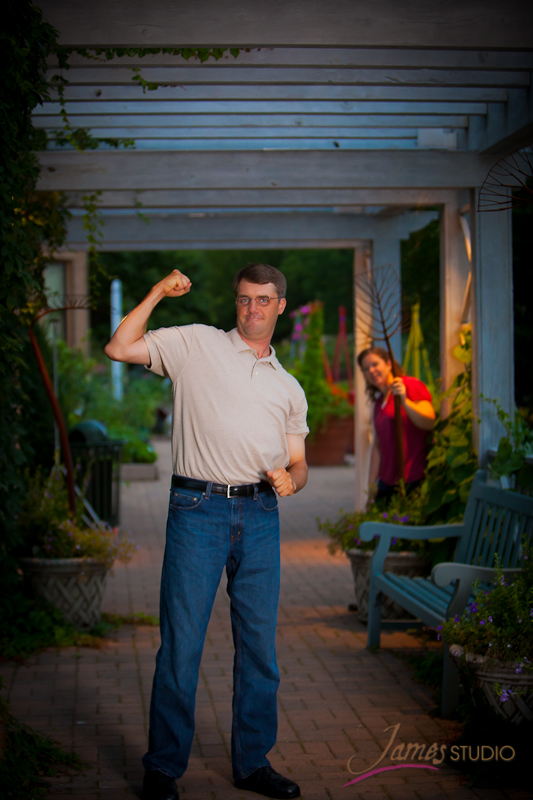 David wanted to have some shots taken next to the burgundy plant on the left (they know what it is).  I suggested that they do a dip.  I muffed up a question about whether they had done a dip before.  It did not come out exactly as I had planned–everyone had a pretty good laugh at my expense.  It turns out this was their first dip.   Not bad for the first time. 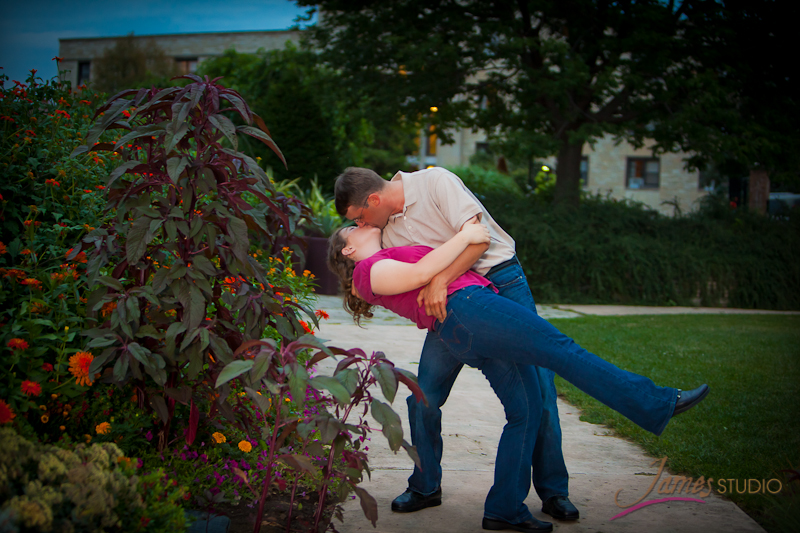