Brad Schuchardt and Ashley Harris were married July 16, 2011 at West Middleton Lutheran Church.  Though the West Middleton Lutheran Church  has a very beautiful sanctuary very few formal pictures taken there.  Instead the majority of the family formal pictures were outdoor pictures at the Stoughton Country Club.  It was Ashley’s plan and it worked because it resulted in natural light with a beautiful background for their formal pictures.  This first photo was taken outside the church.  The dress is hanging in a tree to provide a more interesting background for photographing her dress. 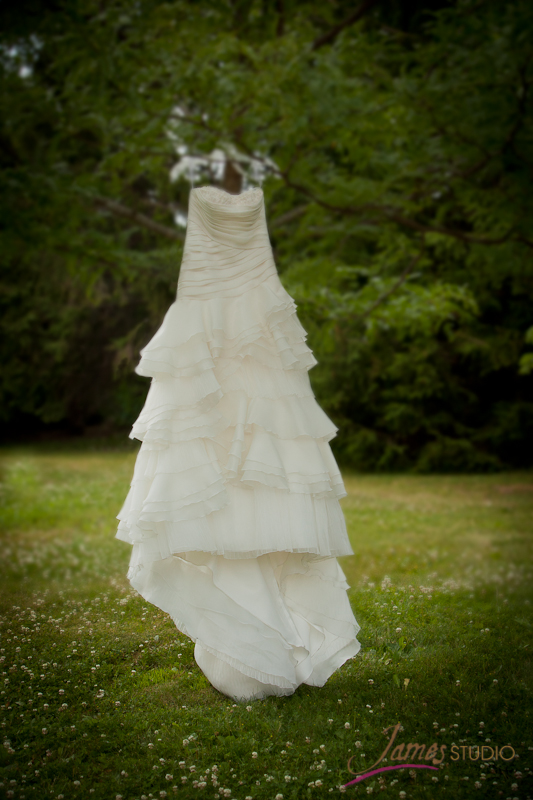 Ashley is looking radiant in this shot. 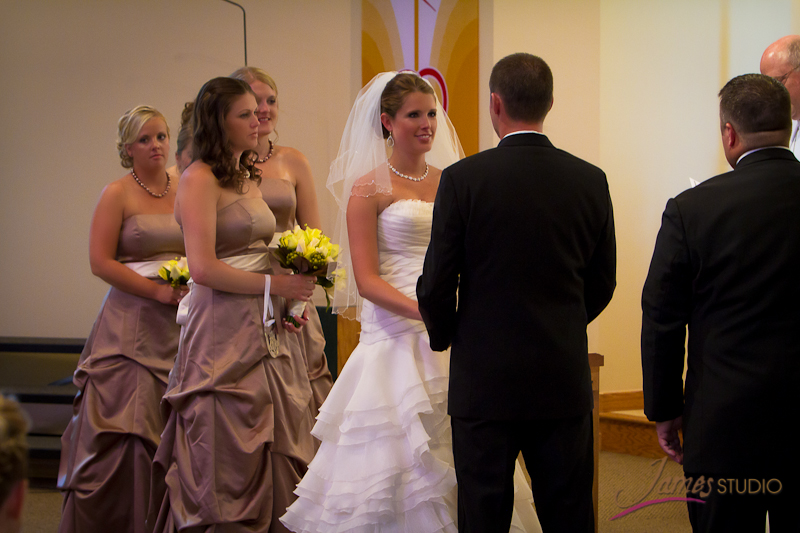 As a photographer I really enjoy the opportunity to be creative and shooting weddings provides a great deal of creative latitude.  Before the wedding I go over the plan with the bride for what is important regarding the day.  Then with a general outline for how the day will go and I have a plan for what shots I want to get.  Sometimes things don’t go as planned and we have to improvise.  For Brad and Ashley’s outdoor pictures at Olbrich Gardens we were running late so we had to do some hustling on a very hot day but we still got some great shots. 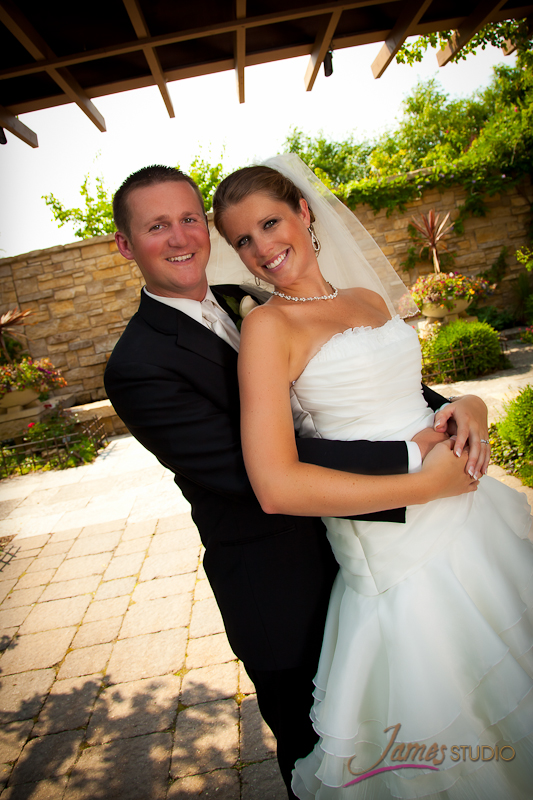 The wedding party was hot from the bus ride and now walking to this location from the visitor center.  I had everyone under this bridge which provided shade.  I was able to capture the shot with even lighting by using a studio strobe.  I love the result of using a full studio strobe for outdoor pictures. 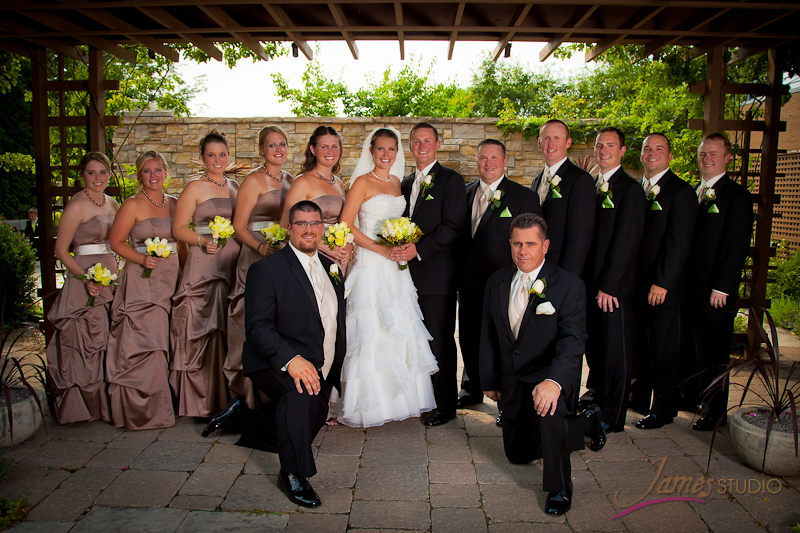 Olbrich Botanical Gardens is the most feature-rich location in Madison for photographic backgrounds.  It obviously is known for its gardens of flowers but it also has multiple waterfalls like this one. 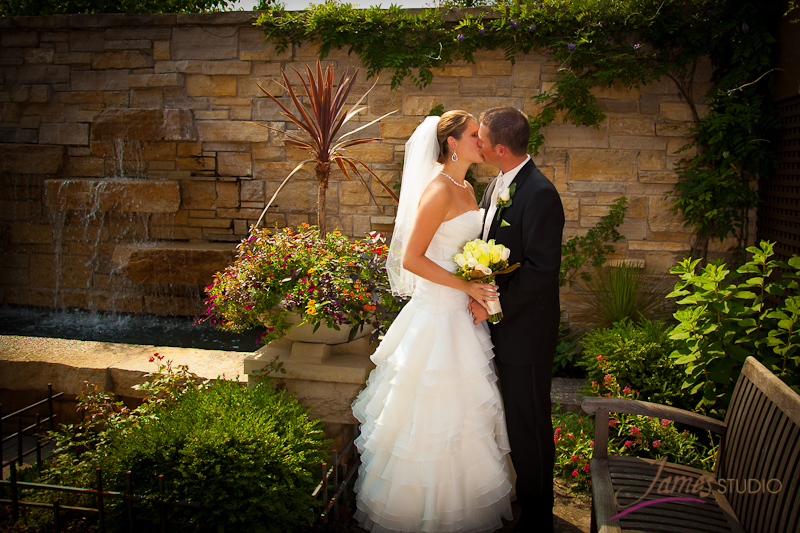 I love the rustic benches throughout the area. 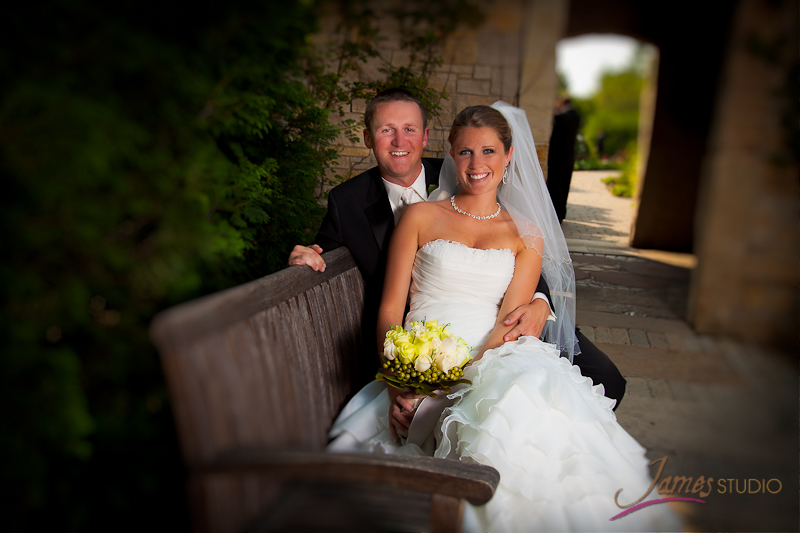 Ashley had a beautiful bouquet as shown below.  Ashley arranged the bouquets herself.  In the background is her dress and foot. 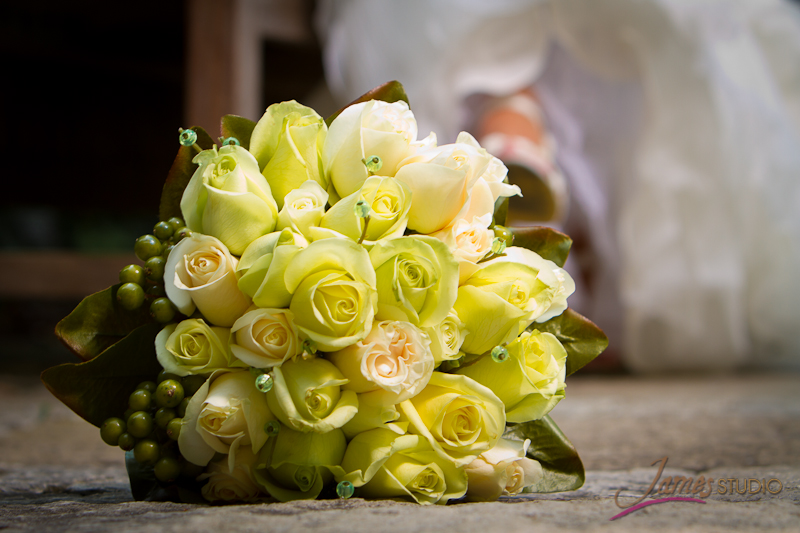 Here is another Olbrich fountain with a little PDA in the background. 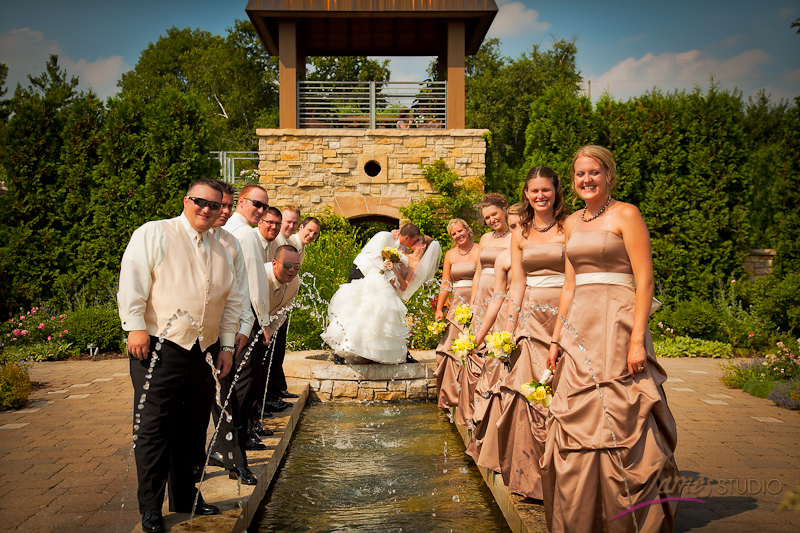 Ashley and Brad arrived at the Stoughton Country Club in the family hot 1965 Shelby Cobra replica sports car.   The mufflers on each side are especially hot, literally.   Clothing or skin that touches the muffler will burn and a few people found this out by personal experience.   You will be glad to know that Ashley carefully got out of the car without injury. 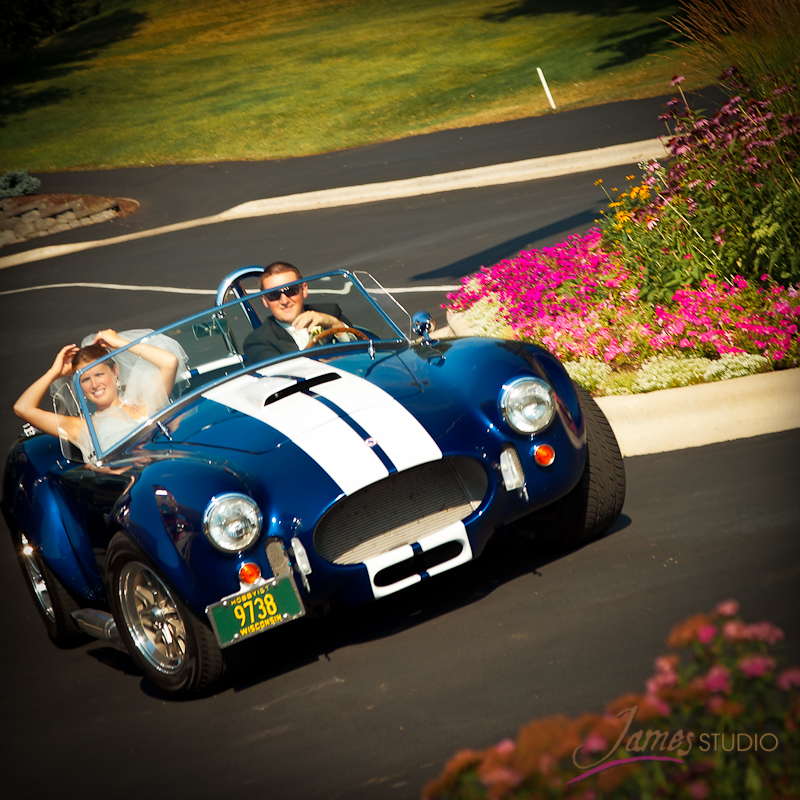 When getting formals of the groom with each of his groomsman and the bride with each of her bridesmaids, I get the standard shot and then ask for something fun.  I provide a few suggestions but Brad and the guys were over the top.  It was so much fun I could hardly shoot straight.  This is Brad sitting on his brother, the best man.   Also, you might be interested to know that the picture below is a composite of two images.  Can you tell?  I don’t think so.  The bottom half of the best man came from another image. 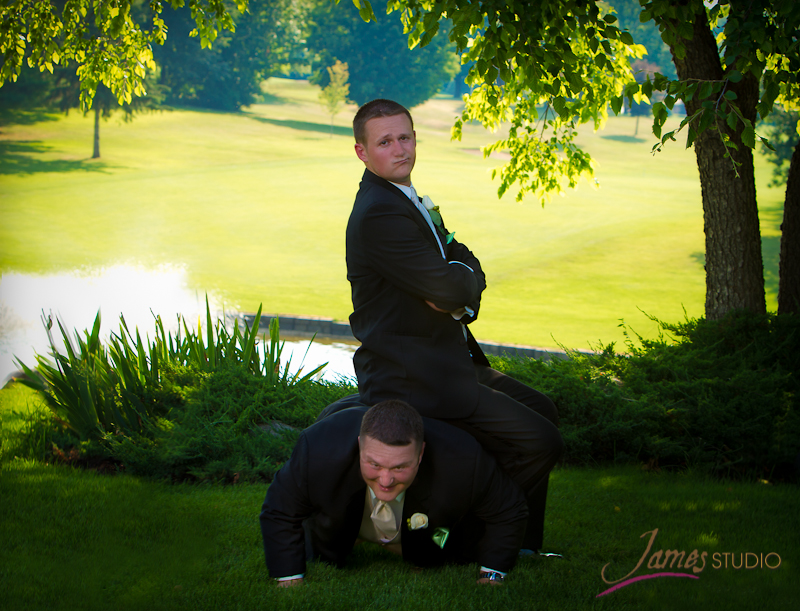 This shot below belongs in Vogue magazine.   Maybe they will give me a call. 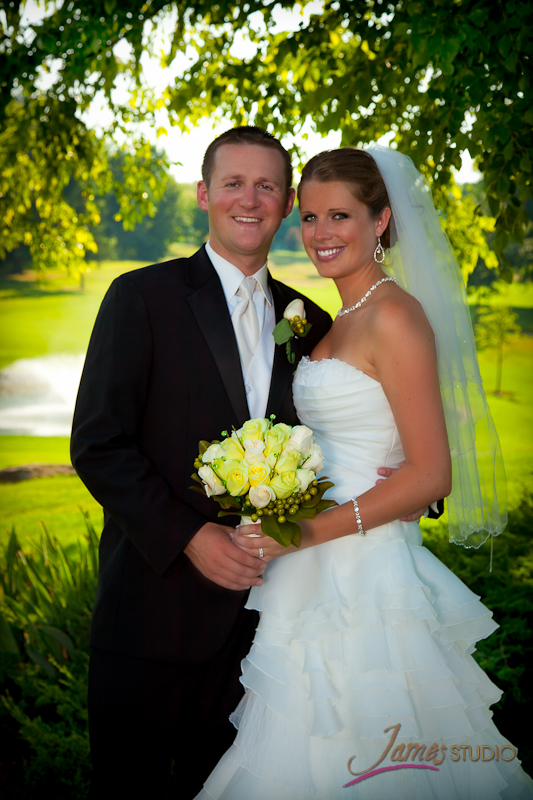 Below is a couple of nice looking young ladies. 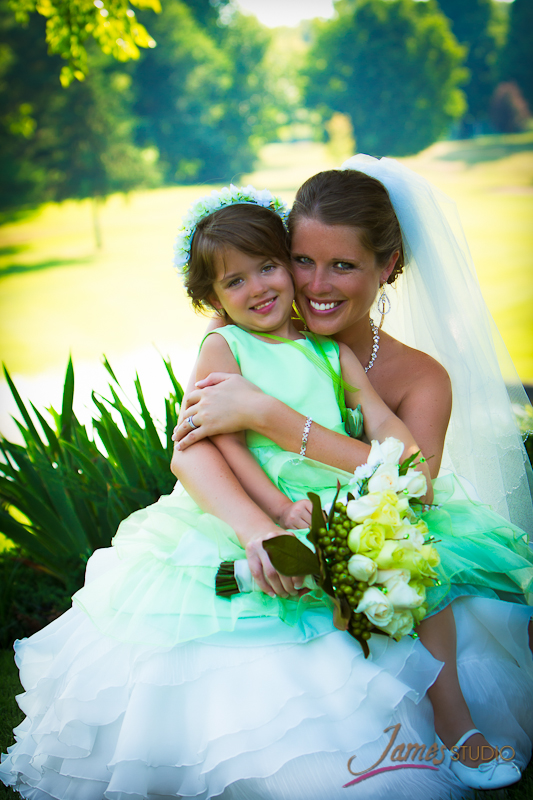 Which is prettier, the ladies or the background? 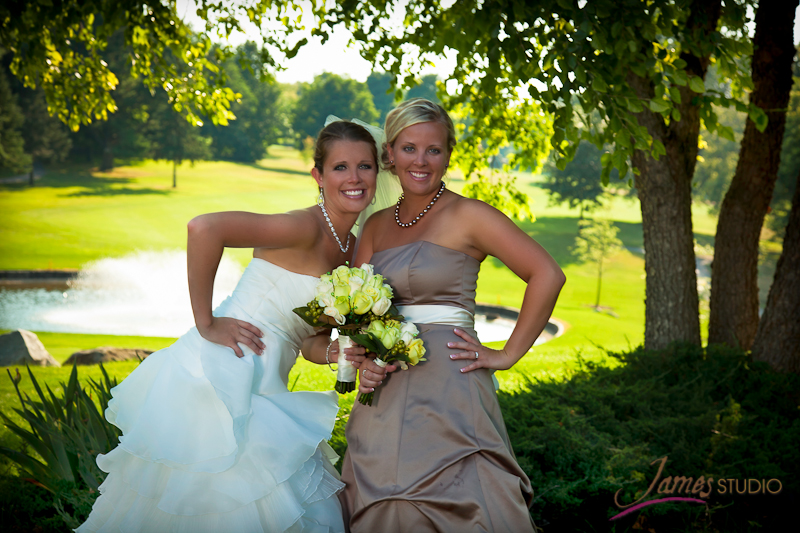 The photo below includes Ashley with her brother and his wife who told him to put a knee down for Ashley to sit on.  Wow.   Great idea!   I love the diagonal line their heads create.   Great pose. 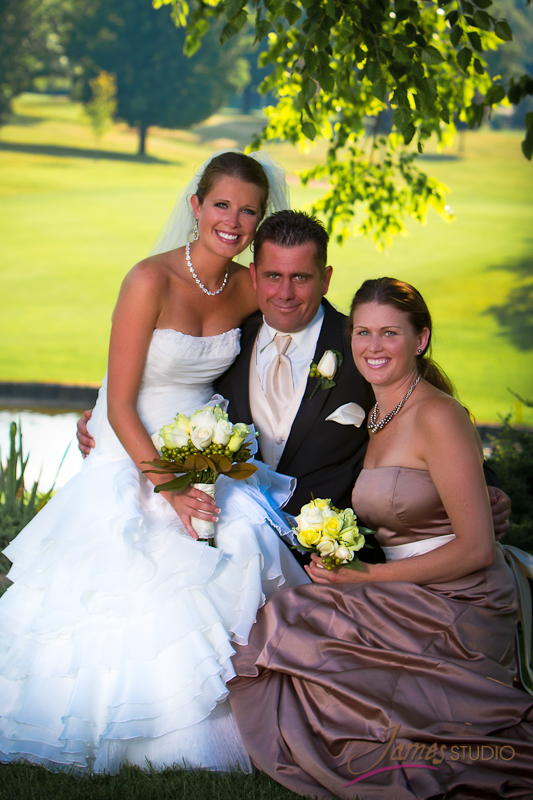 Here was Ashley’s chance to look like a super model.  She did great.  But Brad is thinking, “ya, wait till its my turn.” 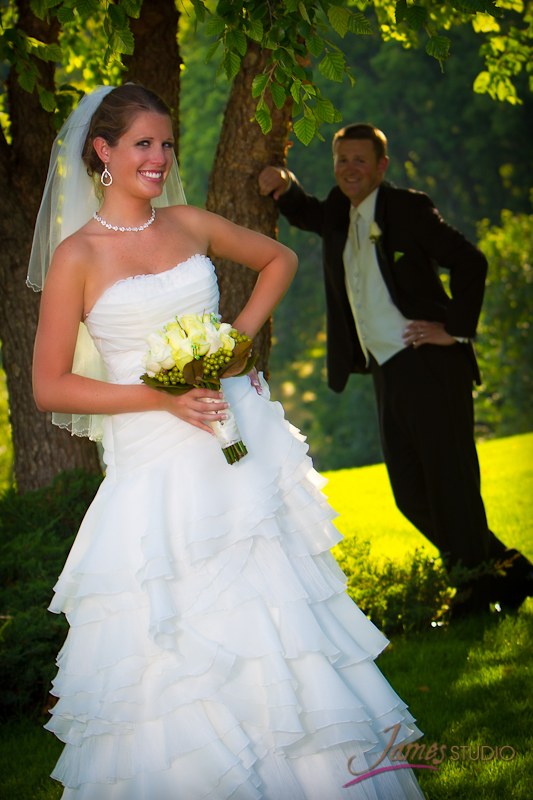 So Brad, show us what you can do.  Unbelievable.  It was like watching a comedy routine.  He was so funny.  I will call this one, “Behold, my bride”.

For those interested in the technical aspect of the photo, it is another composite of two pictures.  Can you see the dividing line?  I doubt it.  Let me know if you think you know where it is.

In fact I will make it a contest.  If there are at least 15 people who will reply I will give away a free 1-hour family shoot, including 6 fully-edited pictures on a disk with rights to print to the family with the closest correct answer.  Entries are limited to one per immediate family.  The family shoot must take place within 45 days of the contest ending and within 15 minutes drive from James Studio at 2611 University Ave.   If there are 15 or more responses I will make the decision Friday, August 12 at 8 pm and will notify the winner through Ashley and Brad (leave enough informtion so they know who you are).   The responses must be posted here on this site to be eligible.   Be as detailed as possible, there will only be one winner.  The person/family who is most correct with the most detail will win.  Be aware that all answers must be approved before they are posted.   You can write your answer in the “Speak Your Mind” box at the end of this post.  If there are enough responses for the contest I will post the two images after the contest is over and reveal the winner with the winning answer. 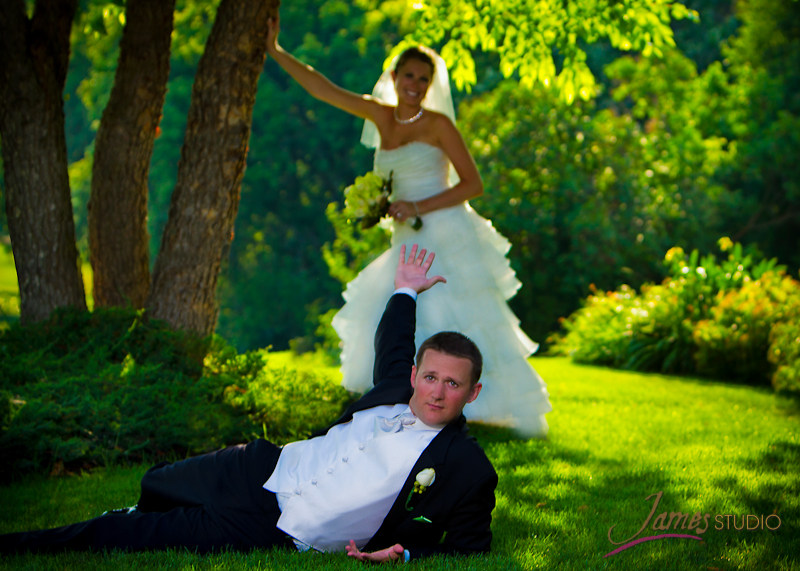 The following picture is also a composite.   Sorry, no contest for where it was composited together.

The contest is completed!   There was a lot of activity checking out the pictures and we got some good guesses for solving the puzzle.  The following is what happened.

I saw the first image and loved it except that Ashley’s head was cut off.  I thought it would be a classic if it wasn’t for that.  I decided to create a composite from two images.  To do that, in Photoshop I had to make the canvas bigger as shown in the picture below. 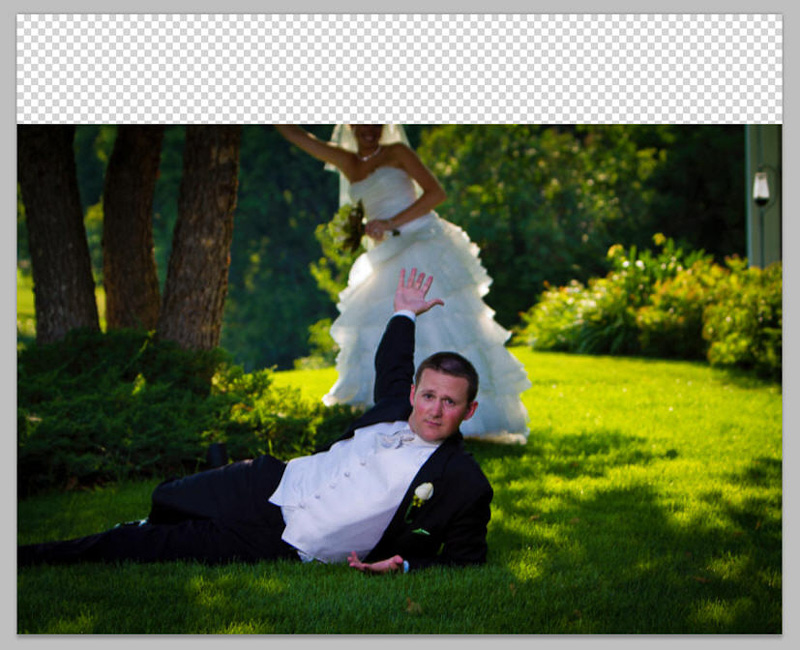 I also saw the image below which I like a lot too.  It showed all of Ashley but this time Brad was cut off.  The other issue is I really liked Brad’s expression and the use of his arm more in the first image.  So I wanted to keep that look while putting together more of Ashley. 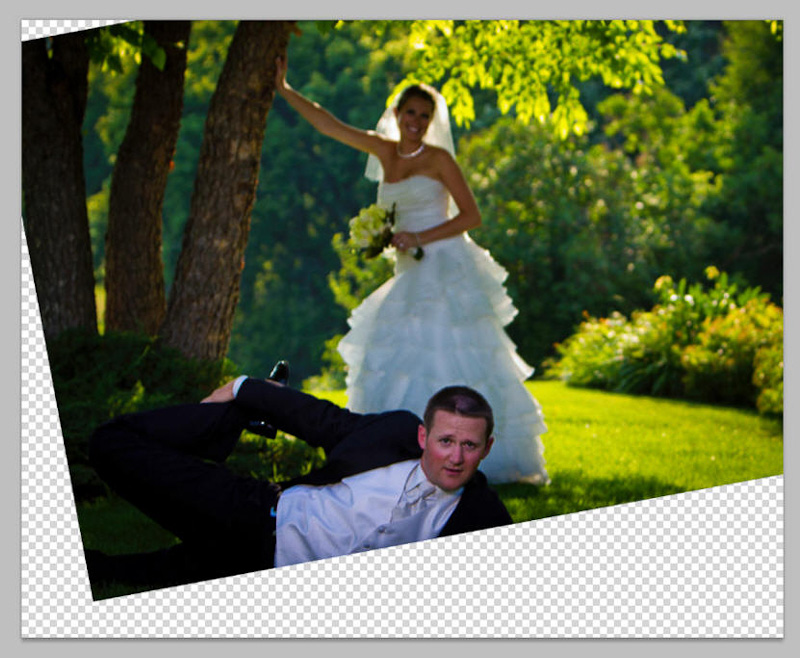 The trick was how to get the two pictures to work together.  It turns out that the key was matching up the tree in both images.

After the contest was announced I noticed a problem.  There was a big gash in the tree that I forgot to fix (see the arrow).  I am surprised that no one mentioned it in their answer.   It could have been the key to being closest to solving the dividing line puzzle. 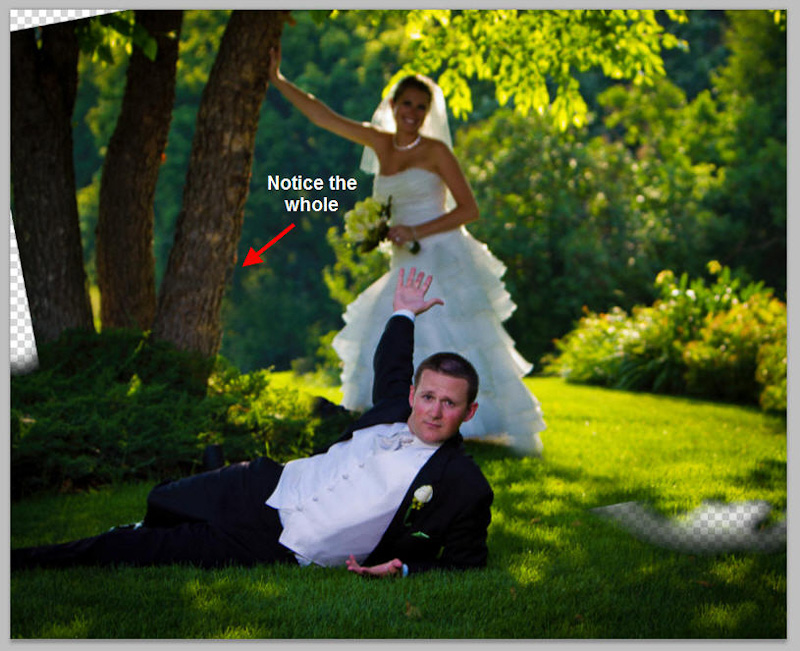 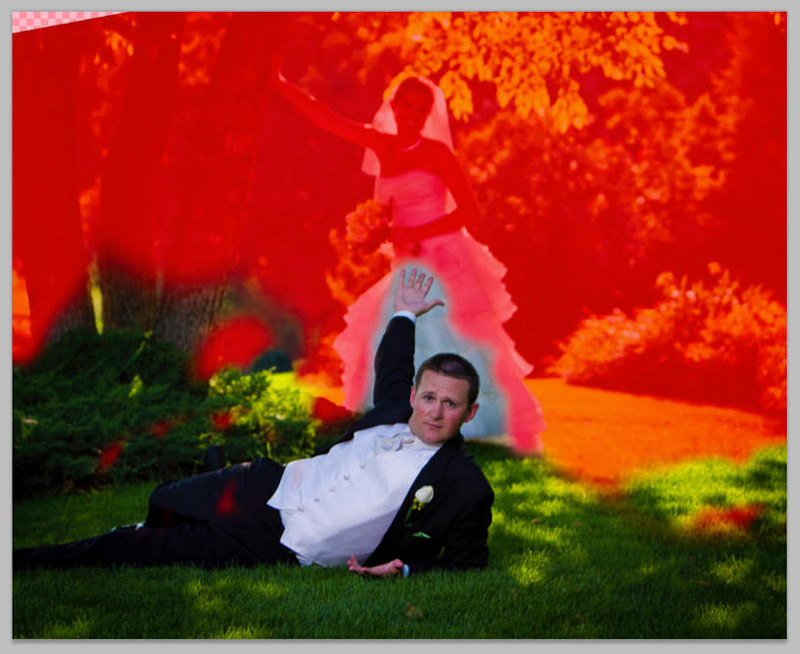 The following picture is one of my final versions.  I added an artistic affect that makes the background have specks all over it.  I also have a version without the artistic affect.  Notice that the gash in the tree is now fixed.

Thank you for playing.  It was a lot of fun to see what you all came up with.  I hope you will take advantage of my offer.  The family shoot does not have to be completed in August but it does need to be booked in August with a 50% deposit. 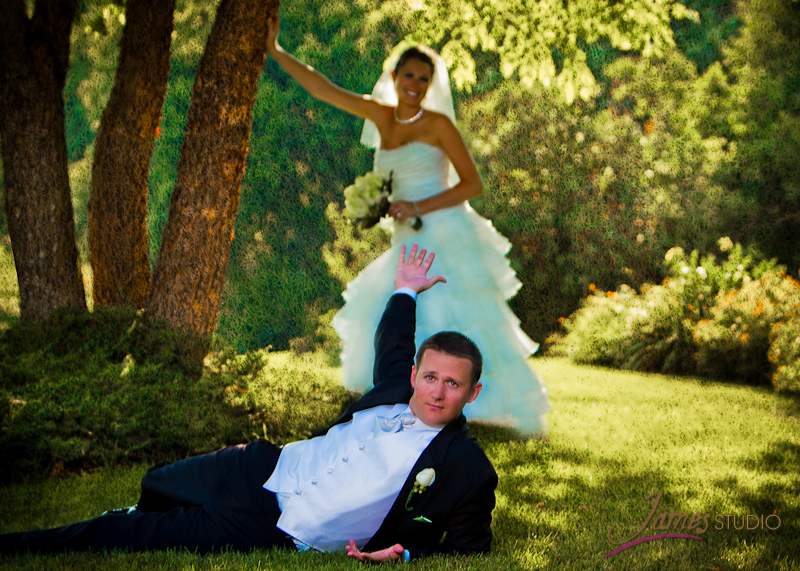