Meet Alex who will be a Verona High School senior next year.

This shot was taken outside of Macys in the Hilldale Mall and with permission from the management.  It was one of the first shots taken for the whole shoot.

Alex has a beautiful expression as the natural sunlight shines through the huge windows, on her face and in her eyes.  I love the soft background and even her shoulders are soft which I think is pretty cool in this shot. 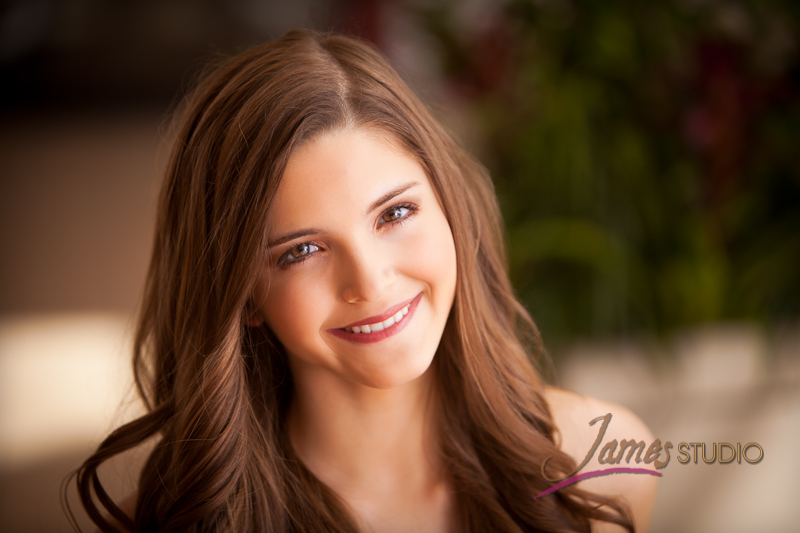 The following shot was taken at the Sundance Cinema in Hilldale Mall.

I love their collection of leather furniture the cinema provides for its customers.  In the background is a variety of objects which provide wonderful color to the images shot there. 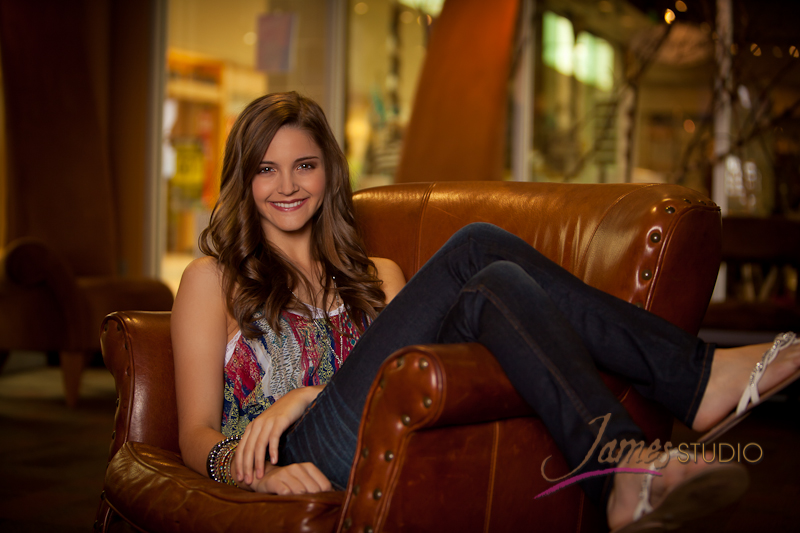 Back at James Studio the following is an image designed to mimic The Hunger Games profile images of the cast.  It was fun to try to get a similar look. 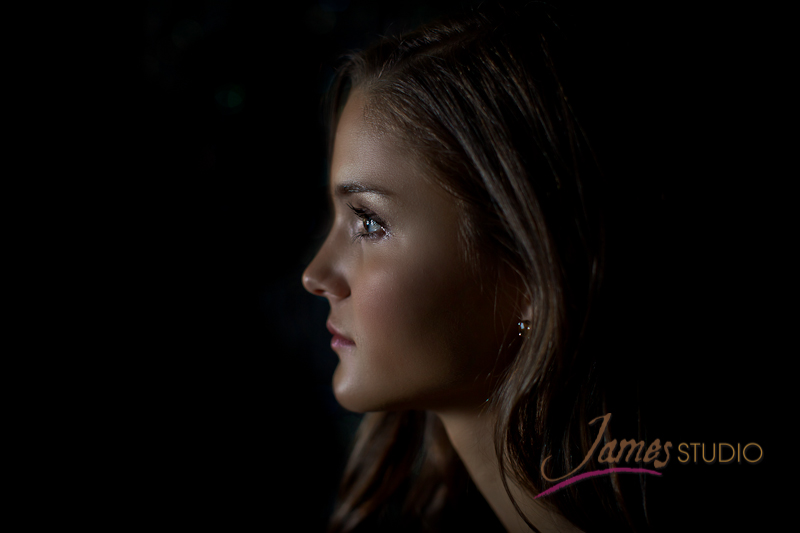 The following was shot against a gray background.  I super imposed this other image in Photoshop. 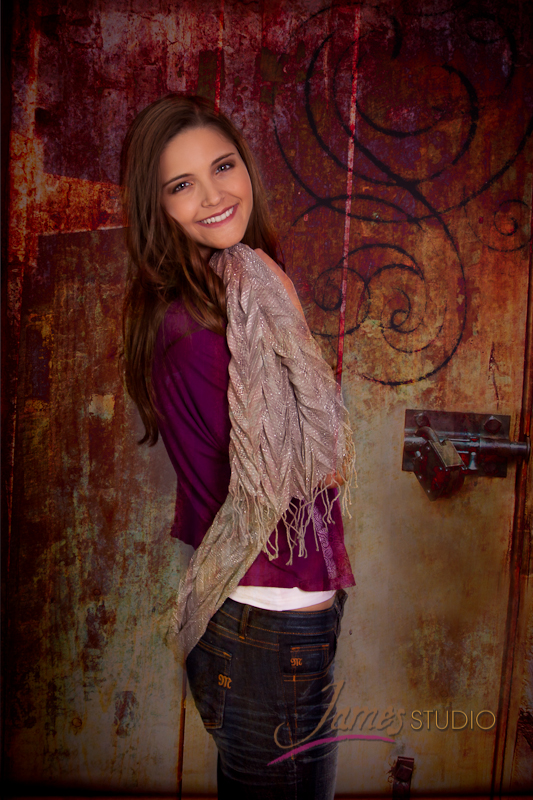 The following image was also shot on that same gray background.  This time I superimposed a leather look to the background and an artistic frame. 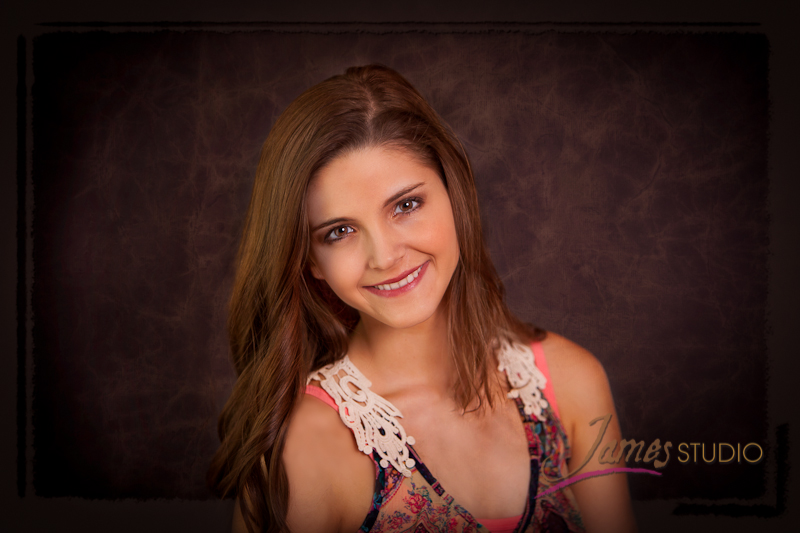 The following is one of my favorite shots of the day.  I love how Alex is lightly holding her hair.  This is with the James Studio real barn wood background.   I think this shot makes her look like Julia Roberts. 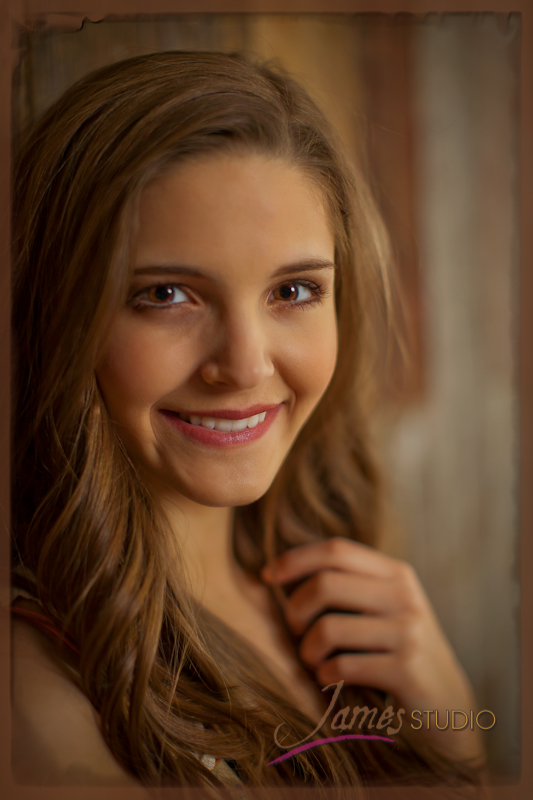 The following photo was taken outside the Sundance Cinemas.   I love how the Hilldale and Sundance pictures turned out.  The backgrounds are very colorful.

I like to point out periodically that I shoot with a studio strobe.  This allows me to have off-camera lighting from a light source that is very large.  There are several advantages to this.  First, is the large catch light in the eyes.  Notice the white dot in Alex’s eyes.   The large light source provides a large catch light that helps to make the eyes sparkle and make the over all picture look much more interesting.  Secondly, a large light source provides for softer shadows.  This area where the photo was taken was quite dark but you cannot tell that at all from this picture.

Though the use of the studio strobe is not unique to James Studio, it is definitely something that sets me apart from the crowd.  I have yet to see another local photographer use a studio strobe in an on-location shoot like this.

We also went to Hoyt Park and took lots of beautiful pictures there like the ones below.

In these shots, in addition to using the studio strobe I am also using contraption called a scrim to prevent the direct sunlight from causing harsh shadows, blowing out some parts and making Alex’s eyes to go squinty.  With the scrim and the strobe I was able to capture all the beautiful colors you see with a subject that is comfortable. 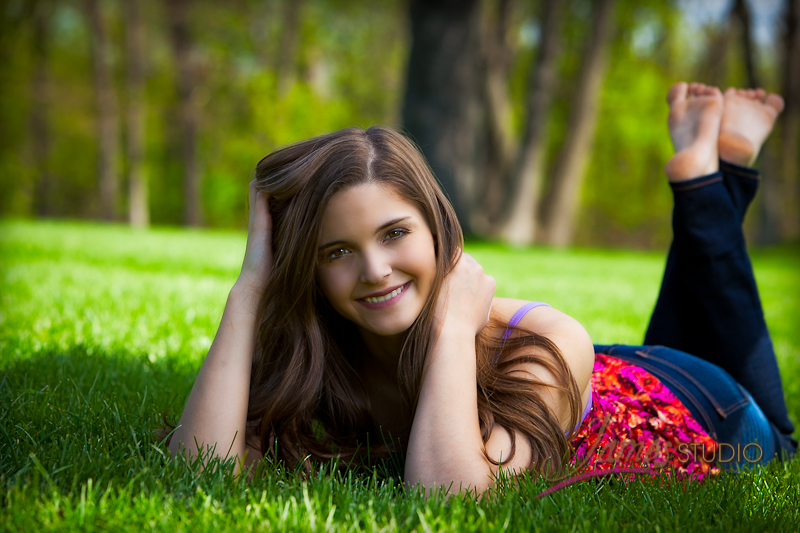 Again, Alex is in a bright place but is fully comfortable because of the scrim.  The strobe is once again producing those catch lights which make her eyes stand out and sparkle.

Earlier in this post, I mentioned the phrase “off camera lighting”.  Why is this important for professional photography?  Off camera light provides shadows that look more natural.  As we look at Alex in the picture below there is a bit more shadow on the left side of the image (as we see it) than the right side.  The shadow is much more dramatic in the image above.  Another factor for off camera lights is it puts the catch light (the dot of light in the eyes) off to the side where it is much more attractive.   Regular point and shoot cameras, with the flash built in, tend to produce a catch light in the center of the pupil which is not very flattering.  The final factor and a very significant one, is the off camera light does not produce red eye but rather brings out the natural colors of the eyes. 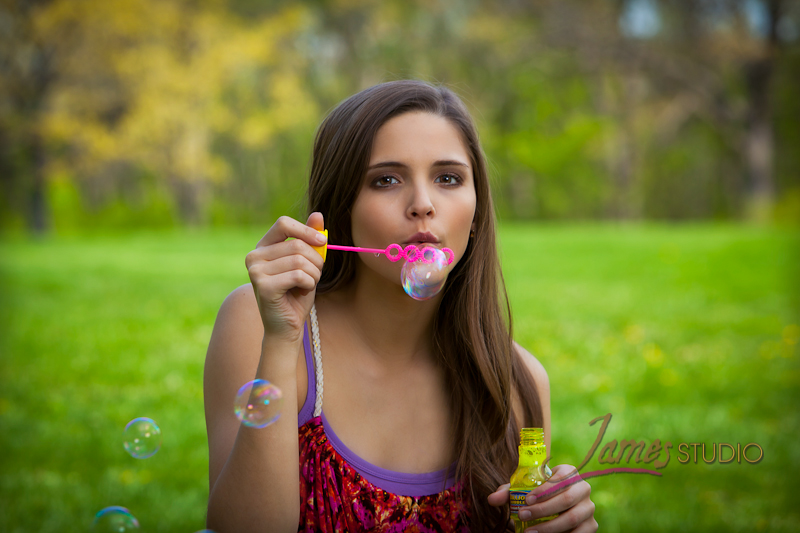 James Studio is currently taking reservations for HS Senior portraits.  With a $100 deposit you can schedule your session now.  Call Jim at 608.233.5556